At Whose Behest PTI Reporters Are Collecting Money From Corporate Houses

Let there be CBI enquiry into this Rs.10 million bilk

Ever heard of someone wearing a dhoti with a zip! Or a man getting blank papers photocopied!! Or a woman offering blank visiting cards!!!

But I have the craziest story to share with you, here on Greater Voice. This is the story of some journalists working with Indian news agency Press Trust of India – PTI.

Also in their loop are some management-level officers of PTI who, together, first hatched a conspiracy and then went on a cheating spree, bluffing Indian corporate houses.

In the process, they are believed to have collected a whopping Rs.10 million from the market. This amount could even be more.

Also, they have been making rounds in the offices of state chief ministers and governors, and government ministers, fooling them around to win their patronage.

And also, they are – right now – busy hobnobbing with top Indian politicians including UPA Chairperson Sonia Gandhi and leaders of Indian political parties to legitimize their illegalities. They are also liasioning with hoteliers, public relation firms and event management companies.

SHOCKINGLY, all this to fund a so-called trade union meet.

The mastermind of this great swindling racket – one M. S. Yadav –  is confirmed to have sent letters and made personal visits to top corporate head offices and ministries promising that he was in the process of engaging even Indian President Pratibha Patil, Vice President Hamid Ansari, Prime Minister Manmohan Singh, Lok Sabha Speaker Meira Kumar and captains of Indian industry, who will be sharing dias with him.

This is unbelievably a true story.

Tell me how many corporate houses encourage trade union activities or fund their workers’ associations, if any?

But this newest Natwar Lal, who is facing trial in Delhi courts for outraging modesty of a woman and committing atrocities on a member of Scheduled Caste community, seems to have exploited the timing of completion of 60 years of PTI.

Yadav is cleverly mixing the occasion with his claimed trade union activities, and charging huge amounts from business houses against putting their off-stage and on-stage banners during his three-day ‘celebrations’ in New Delhi.

And as already mentioned, he’s been telling people that he’s inviting President of India, Prime Minister, Vice President, Lok Sabha Speaker, prominent Cabinet Ministers and political leaders. “We wish to have Hon’ble Sonia Gandhi for the inaugural function and are confident that a number of corporate leaders and chief ministers would also be sharing the dais,” one of his letters read.

“PTI is a national news agency that caters to over 600 newspapers, dozens of TV channels and hundreds of news websites. It has today emerged as a powerful global news organization. We are happy to inform you that the organization has completed 60 long years and we the Federation of PTI Employees Unions are celebrating the Diamond Jubilee in Febrauary 2010,” Yadav said in the letter signed in the claimed capacity of being the general secretary of Federation of PTI Employees Unions.

“Over the years PTI has cemented its position as the most credible news organization with the widest reach in terms of readership, unmatched by any other player in the industry. In the process, PTI has made a number of friends in political, sports, industry, corporate and trade union areas and leading lights from these spheres will join us in celebrations to share our joy and happiness,” he wrote.

First, Yadav’s is not a trade union. It actually trades in unions. His such activities are already being discussed in PTI Diary, which is part of Greater Voice blog.

Secondly, why a corporate house will give money for any purpose to Yadav’s trade union or an association tagged with PTI?

Here is the twist.

Without caring for the purpose for which the money is being sought from them, the corporate houses are making a beeline to fund the such celebrations, because it is claimed to be connected with PTI.

Interestingly, in this influential news organisation, the Business Bureau is controlled by Yadav’s associate Rakesh Hari Pathak who’s been sending his business reporters — this time to collect money, instead of news.

And it is this fear factor which is making the corporate houses pay. Else, they risk being blacked out by PTI in its news coverage on a regular basis!

Another interesting fact is that many journalists who are collecting cheques on behalf of Yadav are themselves not bonafide members of his trade union and have been acting solely on the instructions of their boss Pathak.

Thirdly, Yadav’s status as a general secretary of PTI union federation is also disputed. As a matter of fact, the Bombay High Court on 4.2.2004 had “prima facie” found that there’s a dispute whether or not any person is an office bearer of this federation and thereafter the dispute is pending adjudication. Click the relevant portion of the order ►

Earlier, in 2003, much ahead of the Bombay High Court order, Yadav had attempted to raise funds in similar fashion to organize a fete in Ahmedabad. But it turned out to be a damp squib. May be the lambs were alerted in time before they could be pushed to the altar, that time. The Hindu report dated 7.9.2003 to this effect can be seen below. 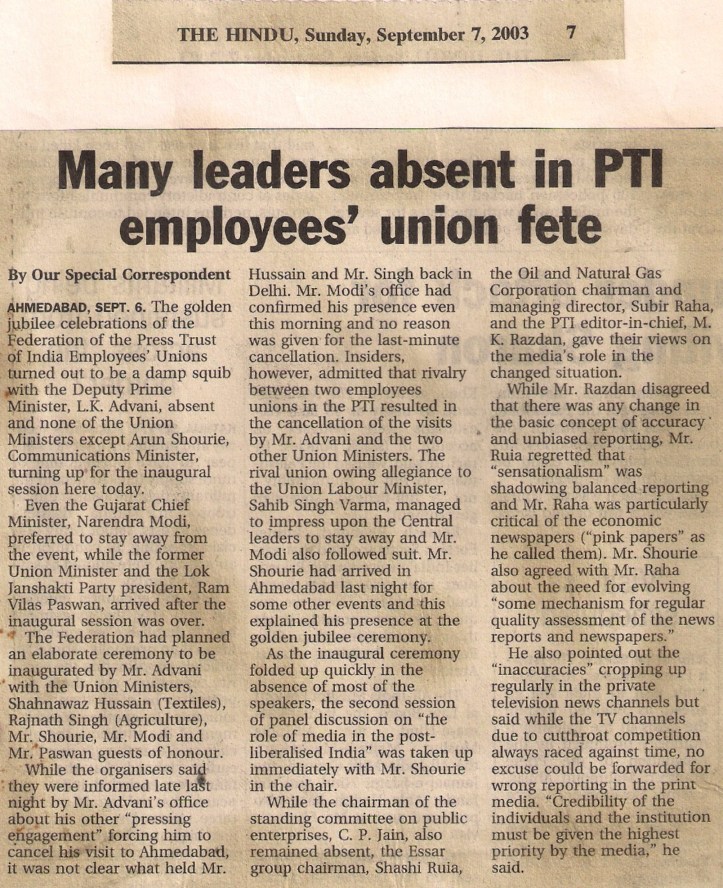 This time, however, the corporate houses have already been targeted. But Yadav, who is actually a puppet of the man running the show in PTI, may not be the only robber. He should be questioned about his gang before the booty is shared. Let Central Bureau of Investigation investigate this great Indian fraud.

The waggle dance must stop.