Friday, the 13th: When Red turned Green in West Bengal

Friday the 13th — in India… it has become a green letter day. This day, a political party symbolized by green colour swiftly wrested a state from the traditional red Communists. Totally bloodless coup.

Usually, the no.13 drives people crazy and this being a dreaded lethal Friday too… woooh! But… this number can now boast of becoming an obsession. From this day forward, only the defeated would fear this number. It’s certainly a big V for victory for the winner, which became possible this day only.

And the winning political party, namely Trinamool Congress — widely known as TMC — has another credit on this day, a unique distinction. It won elections in the Indian eastern state of West Bengal defeating its decades-long rival Communists, mainly the Communist Party of India (Marxist) or the CPM’s uninterrupted 34-year-old rein.

Well, consider this. The winner political party i.e. the TMC had ‘change’ as its election plank; and the election results were announced on May 13.

Now look at this… see what happened with TMC on 13th May… and this appears awesome. T = Thirteen; M = May; C = Change. Bingo. Appears strange! Very strange! 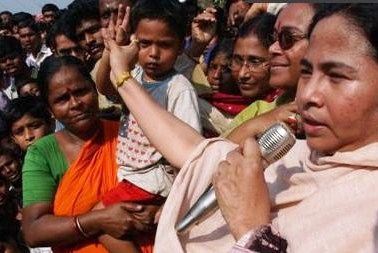 Admittedly, all these strange things happened because of just one woman, Mamata Banerjee who heads the TMC. She’d been fighting for almost three decades and the universe finally conspired in her favour, this Friday, the 13th.

Who would disagree that this woman, 56, who has remained unmarried, is now India’s newest symbol of action, confidence and courage. Her immediate remarks after victory was: “I want to sit on a permanent chair – the peoples’ chair.” Sit well, didi (as she is affectionately called).

I was a student when the Soviet Union collapsed. I was still learning when Eastern Europe turned to capitalism. But this Friday, the 13th of 2011, I saw the citadel of Communists collapsing, melting, crumbling before my eyes… just because it was to be a green letter day… and all because of a gutsy, hungry woman named Mamata Banerjee who, I hope, will now be an inspiration to those resisting repressive regimes.

nb: This post was reopened to insert BlogAdda’s Spicy Saturday Picks image as they selected this write-up for the such recognition.