In a rare, Bob Dylan talks to fans on China controversy 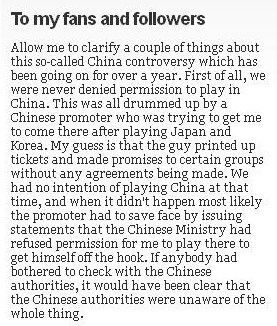 Iconic Bob Dylan issued a statement Friday seeking to clear air about the “so-called China controversy” arising from his maiden trip to Beijing earlier this year and his ‘scheduled’ shows there some time back.

He denied there was any gag order on his singing in China. “We were never denied permission to play in China. This was all drummed up by a Chinese promoter who was trying to get me to come there after playing Japan and Korea.”

“My guess is that the guy printed up tickets and made promises to certain groups without any agreements being made. We had no intention of playing China at that time, and when it didn’t happen most likely the promoter had to save face by issuing statements that the Chinese Ministry had refused permission for me to play there to get himself off the hook.”

The singer-songwriter said his troupe did visit China this year but under a different promoter.

Again, it was reported that the concerts were attended mostly by ex-pats and there were a lot of empty seats. “Not true,” he said.

“If anybody wants to check with any of the concert-goers they will see that it was mostly Chinese young people that came. Very few ex-pats if any.”

The Chinese press had also touted him as a sixties icon, to which Bob Dylan said: Ask anyone who was there. They were young and my feeling was that they wouldn’t have known my early songs anyway.

He also stated that there was no censorship whatsoever on his numbers, but said that the Chinese government had indeed asked for the names of the songs that he would be playing. “There was no logical answer to that, so we sent them the set lists from the previous three months. If there were any songs, verses or lines censored, nobody ever told me about it and we played all the songs that we intended to play.”