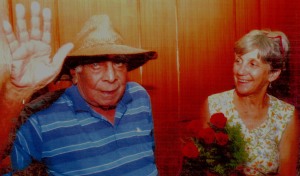 A friend greeting Prof. Bhatia on his 84th birthday.

There is so much of youth in Prof. Bhatia – the 84-year-old young man.

No wonder, his friends arrange his each birthday with gusto, some of them even aspiring to learn the tricks he plays with life. But, every time Prof. Bhatia dodges their queries, leaving all at sea. I am lucky, as he recently budged to my persistent quizzing.

“What gets you kicking Professor?” I kept asking him for over three months. One fine day, he yielded: “A game of football and divine imagination.”

No. There are so many things other than these which keep Prof. Bhatia erect.

He is a fantastic human being and an out of this world poet. A good chess player too and a veteran footballer, though he played almost all indoor and outdoor games in his youth.

To me, he is an invaluable friend. I have always seen him smiling, and extending his scrawny right hand to all who choose to wish or ignore him.

Born at Dera Ismail Khan, Pakistan, Prof. Neb Raj Bhatia migrated to India a couple of months before India became independent. Starting from the scratch as a typist, he got himself educated in French, Spanish, German, Italian, Portuguese, Urdu and Persian besides doing his B.A. with French and M.A. in English Literature from Punjab University Camp College, New Delhi which took him to various countries across the globe.

He got First Rank in an All-India Competitive Examination for selection of French Translators held by UPSC in 1955, joined in that capacity DGP&T, New Delhi and in the following year, i.e. 1956, he was awarded a two-year scholarship to study Spanish Language and Literature and went to Spain where he also studied Portuguese. On his return to India in 1958, he followed courses in German and Italian. In 1959, he was deputed as a part-time teacher to teach Spanish at Bhartiya Vidya Bhawan, New Delhi. In 1963, he established Diploma Course in Spanish at Delhi University and also taught French and Spanish at Indian Institute of Foreign Trade, New Delhi. He taught these two languages for five decades. Lately, at the age of 80 years, he has done a diploma Course in Persian at the Iran Cultural Centre, New Delhi.

Again in 1969, he stood First in a competitive test for French-English translators held by the International Bureau, Universal Postal Union, Bern (Switzerland) and went to Tokyo to work for 45 days during the sessions of the XVI UPU Congress.

Before his voluntary retirement from government service in 1977, he worked as a simultaneous and consecutive interpreter/translator in international conferences and also accompanied high dignatories visiting India to various universities, institutions and industrial installations in India. After his retirement, he established ACTIVOS (Multi-lingual People) and covered 250 international conferences as interpreter-translator in India and abroad.

Because of his literary pursuits in English, French, Spanish, Italian, Hindi and Urdu, he won laurels as he took part in several poetic symposia (mushairas) in India and abroad. In 1994, he was sponsored by the Indian Council for Cultural Relations (ICCR), New Delhi, to participate in poetic symposia in Medellin and Bogota (Colombia), where he recited his Spanish verses among 70 Spanish-speaking poets to the great applause from the audience.

The “Spanish Professor”, as he is called, also worked as interpreter-cum-translator with some top Indian leaders including Indira Gandhi whom he refused to give tuitions, saying: “One cannot create the class room atmosphere of teaching and learning in a wealthy person’s living room. You have to come to my class.”

Presently, I believe, he has more than a few ailments including asthma, but that does not deter him from taking his regular dose of three-to-four pegs of whisky, while his all time buddy – a hat – silently keeps an eye on him. Surely, Prof. Bhatia seems to have taken more from alcohol than alcohol has taken from him. Today, as I wait for his collection of Urdu poems “Awaargi” (The Wanderlust) and his Spanish poetic anthology “El Wanderlust y otros poemas”, may I put to the professor the famous lines from the film Arth (Meaning):

Please feel free to post your comments. Alternatively, you may also send emails at neerajbhushansingh@gmail.com and share your concerns or ideas with me. I always take the opportunity to read all and reply to everything. Did you like this blog? Send me your comments, suggestions, etc. please.