Is it fair to warn people of AIDS by likening the deadly disease to Adolf Hitler, Saddam Hussein or Joseph Stalin?

An advertising agency had done that.

Its 45-second ad on German TV and also in cinemas shows a couple having sex and as the commercial progresses, the man’s face turns into Hitler’s as he looks straight into the camera. The tagline being: “AIDS is a Mass Murderer. Protect Yourself!”. 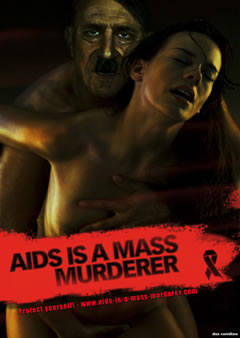 Hitler may be the ugliest face you can use to show evil but you cannot make a point like this – that AIDS, like Hitler, is a mass murderer. Oh! C’mon.

The advertisement’s shock value is hard-hitting and is sure to generate controversy, particularly when it fails to provide any kind of actual prevention message.

This ad campaign has been designed by Regenbogen e.V. in conjunction with the advertising agency ‘das comitee’.

“Our campaign to mark World AIDS Day 2009 speaks in clear terms: the new slogan is ‘AIDS is a mass murderer’. The few mass murderers who have claimed a similar number of human lives are shown: Adolf Hitler, Joseph Stalin and Saddam Hussein. The campaign is designed to shake people up, to bring the topic of AIDS back to centre stage, and to reverse the trend of unprotected sexual intercourse. Because anyone can become infected,” announces the campaign office. 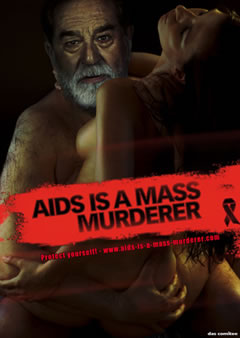 According to the ad agency, public interest in AIDS has massively declined over the past number of years. The number of victims, however, has not.

As of now, over 28 million people worldwide have died. And every day, almost 5000 new deaths are added to that number. This makes AIDS one of the largest mass murderers of all time.

“In Germany alone, around 60,000 people are infected with HIV or AIDS. Nobody should be allowed to forget these numbers. As anyone who forgets can become a victim themselves,” it says.