A Tale of Two Muslims

My Name Is Husain

India is on fire. Or am I exaggerating! Two Muslims – a man and a woman – are at the centre of this blaze.

While the MAN is in storm for his magic brush, the WOMAN is being castigated for wielding a revolutionary pen. 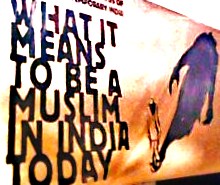 Right now, the former, an Indian living away from India for over four years, is embracing citizenship of another country, and the latter, a Bangladeshi, is living in-and-out-of India begging asylum.

The government, as usual, is MUTE : (

Wish the two, currently being hounded, were the ones found in a series of fantasy characters written by British author J. K. Rowling. Wish they were Harry Potters and could struggle and win, simultaneously. But one is just MF Husain, 94. And the other is mere Taslima Nasreen, 48.

Legendary Husain’s celebrated paintings are, still, arguably the best; but we are shying away from declaring him our cultural czar.

As also, we are allowing our soil to launch raucous and insolent behavior against freedom of speech and expression, by attacking the works of Taslima Nasreen.

And the vulnerable duo hardly have time, patience, resources and energy to retaliate their obnoxious attackers with solid fists.

Can I do something? Can I stop the sword from becoming mightier than the brush and the pen? Can I embrace both Husain and Nasreen?

I welcome both of them to my home, promising safety, comfort and the right atmosphere to paint and write. May they feel it fit and proper to live at my house and also to make it their workplace. My mind is without fear, at least.