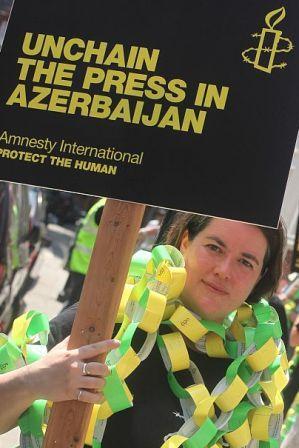 The European Court of Human Rights today unanimously found Azerbaijan in violation of a journalist’s right to freedom of expression, Human Rights Watch said. The court, by a vote of six to one, also ordered his immediate release.

In its ruling, the court found that Azerbaijan “grossly” and “disproportionately” restricted freedom of expression by imprisoning Eynulla Fatullayev, one of the country’s most outspoken journalists.

In an exceptional move, the court also told Azerbaijan that its unlawful imprisonment of Fatullayev did “not leave any real choice as to the measures required to remedy the violations” and ordered his immediate release.

The European Court of Human Rights is the regional court for the Council of Europe, and is the ultimate arbiter on states’ compliance with the European Convention on Human Rights to which Azerbaijan is a party. Judgments of the court are legally binding on states and their execution is subject to supervision by the Council of Europe and the court.

Fatullayev is the founder and editor-in-chief of Realny Azerbaijan and Gundelik Azerbaijan, which were among Azerbaijan’s most widely circulated newspapers. Fatullayev was convicted in two separate sets of criminal proceedings. In April 2007, he was charged with defamation and imprisoned for two and a half years over an article and an online comment regarding a 1992 massacre of Azeris in Khojali, Nagorno-Karabakh, when hundreds of Azerbaijani civilians are believed to have been killed by ethnic Armenian armed forces.

Six months later, Fatullayev was sentenced to an additional term, totaling eight and a half years in prison for “fomenting terrorism” in connection with an article he had written in Realny Azerbaijan. The article argued that the government’s support for the United States’ position on Iran made Azerbaijan vulnerable to attack from Iran, and speculated on likely targets of such an attack.

While the court acknowledged the “very sensitive nature of the issues discussed” in Fatullayev’s article regarding the killings at Khojali, it noted that “freedom of information applied not only to information or ideas that are favorably received, but also to those that offend, shock or disturb.” It also reiterated the role that freedom of speech and the media play in a democratic society to seek out historical truth.

The court determined that the second article was a matter of “general and public concern” and concluded that it had been Fatullayev’s task as a journalist to impart information and express opinion about the government’s foreign policy stance and possible consequences. The court said that the publication of a list of possible targets “neither increased nor decreased the chances of a hypothetical Iranian attack,” and that Fatullayev’s conviction by the domestic court had been arbitrary.

In an apparent attempt to punish Fatullayev for lodging his complaint against Azerbaijan with the European Court, in December 2009 the authorities pressed additional drug possession charges against him. The investigation into these charges has been completed and the case has been sent to court.

“The new bogus charges are clearly intended to intimidate Fatullayev further and keep him locked up,” Gogia said. “The government should immediately drop all charges against Fatullayev and free him.”

The court held that imprisoning individuals for “press offenses” violates freedom of expression guaranteed under article 10 of the European Convention of Human Rights.