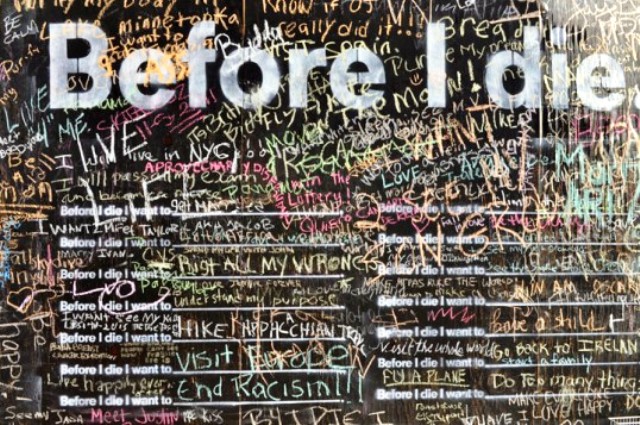 Do you think of death just like that… Does this haunt you… How planned your life is… What all would you like to do this life?

Well.. a wall is recording all this, in chalk as a public art project in Washington D.C. It is encouraging passersby to record their dreams and aspirations.

There… many… and so many are writing and everyone is seeing the “Before I die” wall. One after another… so so many wishes are being recorded over there… like this one — Before I Die… I Want To… “Make people feel loved.”

Some other random jottings that I could pick from the wall are:

Before I die… I want to:

Some others said they would like to achieve things both enormous and infinitesimal. Some said they want to eat good food, see continents and effect political changes. Some also desired meeting God. Maura Judkis, a journalist with the Washington Post newspaper says: “They may have carried these aspirations in their hearts and heads their whole lives, but until a chalkboard sprang up.”

The “Before I Die” wall is a creation of Candy Chang, a public installation artist, designer, urban planner, and co-founder of Civic Center who likes to make cities more comfortable for people.

As Chang describes it, “Before I Die transforms neglected spaces into constructive ones where we can learn the hopes and aspirations of the people around us.”

With the help from old and new friends, Chang erected the chalkboard on the side of an abandoned building in her neighbourhood to help residents remember what is important to them.

Okie! What would you write, if you happen to be there? Or is this an incongruous idea? Is this promoting vandalism and graffiti? Is life too short to dwell upon all these?

This makes me recall a religious ceremony that took place in my neighbourhood some three decades back, when one gentleman oversaw his own ‘death’ and the ‘aftermath’. Actually, he invited relatives and acquaintances to his own ‘funeral’ and then organized all ‘his’ death rituals (shraadh) in his lifetime only.

Of course, he did not allow fire to be lit. Else he would have been reduced to ashes leading to the actual mourning. Well, that gentleman was a dying person and was not very sure of the treatment he would get from his ‘unworthy’ sons, after his death. Hence he just ensured a decent bye-bye to himself. May be this was the desire that he indeed fulfilled before he died.

Reports say Maruti Suzuki stock continues to extend losses. The shares are trading down 2.4 % to Rs.1,230. Is this because Suzuki Motor just posted a lower-than-expected Q4 operating profit and gave muted guidance! Suzuki Motor Corp owns a 54.2 % stake in the local unit. Are other models from Maruti’s rival Hyundai giving it fast competition now?

Should Maruti also begin offering discounts and other benefits on its various models — which according to me are far better than its competitors!

Maruti Suzuki India Limited is primarily in the business of manufacture, purchase and sale of motor vehicles and spare parts (automobiles). The other activities of the Company consist of facilitation of pre-owned car sales, fleet management and car financing.

The Company offers a range of cars across different segments, offering 15 brands and over 150 variants. During the year ending March 31, 2011 (fiscal 2011), the Company sold over 1.27 million vehicles, including 1,38,266 units of exports. The Company is a subsidiary of Suzuki Motor Corporation.

Finally… PIED PIPER Neelesh Misra seems to be soaking in the moment. The occasion — the teaser of Ek Tha Tiger, his first film as scriptwriter is out. “It’s a privilege co-writing this Salman-Katrina romantic thriller for Yashraj Films with champion director Kabir Khan,” he told Greater Voice. Watch it here:

Neelesh’s new song “Khudaya” from the Dibakar Banerjee film “Shanghai” is also out and It too seems to be a nice composition by Vishal Dadlani and Shekhar Ravijiani.