Where in the world do students go to study?

Now students are increasingly becoming mobile. Education centres and study hours are also becoming flexible across the globe. Immediately after schooling, aspiring children are crossing their national borders to study, or are enrolling in a distance learning programme abroad. Education hubs are developing in every region to attract the growing concentrations of mobile students.

But where do students go to study? Where do they come from? A data on the such mobility of students, prepared by UNESCO Institute For Statistics, sheds light on this shifting demand for higher education.

Interestingly, some countries have more students studying abroad than at home. In São Tomé and Principe, for example, fewer than 1,000 students were enrolled in domestic higher education institutions, whereas approximately 2,500 students studied abroad. 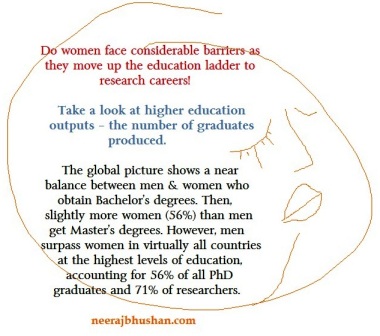 Outlining the progress and pitfalls in women’s pursuit of higher education, data analyst Chiao-Ling Chien says, “We have seen unprecedented growth in women’s enrolment over the past four decades. The number of female students in tertiary institutions has grown almost twice as fast as that of men since 1970.”

Women started catching up to men in North America and Western Europe in the 1970s and even surpassed male enrolment rates by the early 1980s. A similar trend occurred in the 1990s in Latin America and the Caribbean, as well as in Central Asia. This being said – women have had the advantage in the formerly Communist countries of Central and Eastern Europe for the past 40 years.

The real news is in the Arab States, as well as in East Asia and the Pacific. Both regions just reached the parity line, after decades of steady growth in female enrolment.

However, women continue to be disadvantaged in South and West Asia and in sub-Saharan Africa. This is partly due to the fact that relatively few students are able to pursue higher education. When educational opportunity and resources are scarce, it seems that women are less likely to get them. Across sub-Saharan Africa, there are only about 62 female students for every 100 male students. In South and West Asia, there are 74 women enrolled in tertiary education for every 100 male students.

Greater Voice feels that in the global effort to achieve Education for All by 2015, the financing of education is a key issue for the policy makers and interested agencies. Sources of funding need to be created and properly circulated for better usage and results, especially when the education is increasingly becoming costly.