Will Court Direct US To Release Osama bin Laden’s Photos 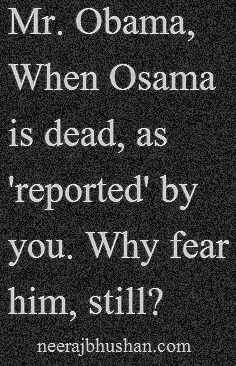 What happened during the dramatic raid on Osama bin Laden’s compound in Pakistan!!!

{in Judicial Watch Inc. versus U.S. Department of Defense}

Osama bin Laden is dead – Greater Voice was one of the firsts to interpret this news and tell the world that the big fish death would benefit the U.S. President Barack Obama the most.

It did; you would agree. But Greater Voice did not merely capture-read Obama’s calculative announcement – “I can report to the American people and to the world, that the U.S. has conducted an operation that killed Osama bin Laden.”

But as life moved on and the U.S. president talked to “60 Minutes” on CBS, the graphic photographs of Osama bin Laden’s corpse was still not made public and thus Greater Voice demanded that those pictures must be shown to all.

Then the Associated Press went a step ahead filing a ‘Freedom of Information Act’ request for all of the photographs and video taken by U.S. military personnel during the raid on bin Laden’s compound in Pakistan and on the USS Carl Vinson, the ship that conducted his burial at sea.

In the meantime, a Pakistani military official, who had taken some photographs inside the house where Osama was claimed to have been killed, had sold those pics to Reuters news agency! The images were taken about an hour after the US Navy SEAL commandos finished their mission at the secret house in Pakistan’s Abbottabad town.

NOW, Barack Obama’s administration is defending its decision not to release photos of Osama bin Laden’s dead body, warning that doing so would risk “grave damage” to national security.

The al Qaeda leader was slain in May 2011 in a raid on his Pakistani compound by American commandos, who took pictures of their target in order to confirm the success of their mission. It is said that 52 photos were taken during the operation.

How horrifying are the pictures that the Obama administration fears they could excite an angry, even violent reaction against Americans?

In April 2012, a court threw out the media’s suit, accepting the position of the Central Intelligence Agency that their publication could harm national security. The such decision has been appealed against by Judicial Watch, a legal watchdog, against which the U.S. Department of Justice said that the images pose “grave damage to the national security”. Click here to read the earlier 29-page ruling in the matter. Judicial Watch believes no one is above law.

But we must press hard for bin Laden’s photos and the U.S. agencies should not think too much if the such images of the man that the world nick-named terror mastermind be released?

Judicial Watch has said its appeal makes clear that the group is not seeking information about equipment or techniques used in the raid to kill the al Qaeda leader. [Read the transcript of the oral argument dated Jan.10, 2013.]

For the time now, the American citizens should also ask their government to better explain to them why the release of specific images of bin Laden’s body would damage national security. Ayman al-Zawahiri, an al Qaeda leader, had made statements that bin Laden’s body was not treated in accordance with Muslim traditions.

Legal filings in the case indicate a top Central Intelligence Agency official made the decision to classify the 52 photos “top secret.” However, President Barack Obama announced shortly after the raid that the photos would be kept secret, despite an earlier prediction by then-CIA Director Leon Panetta that they would eventually be released.

But… are the graphic details so controversial that even the Freedom of Information Act will be amended, finally for the U.S. administration to withhold the such documents! The debates must go on… A picture is really called worth a thousand words… as this case proves, too.

Until then… watch out for the movie – Zero Dark Thirty – to see the dramatised version of the dramatic raid on bin Laden’s compound as the U.S. government continues to keep the actual events as classified.

According to U.S. officials, three men and a woman were killed alongside bin Laden, including one of his sons, in the American operation. Pakistani officials add that three of bin Laden’s wives and 13 children were removed from the house after the raid.