10 years of my PTI struggle – can it rain for ever! 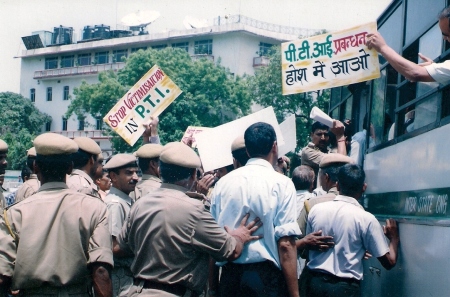 The last 10 years are important and eventful in my life with May 7 in particular, etched so deep in my mind – as on this very date in 2003, my organisation Press Trust of India, a news agency in India, served me a back-dated dismissal order terminating my services by way of victimization only because of my bonafide trade union activities for daring to raise reasonable demands of the employees with the management, which were not to its liking.

Consequently, I, on my part, all these 10 years, gave my wife, children and family (less money but) more love, (less comfort but) more respect among others, as I continued to work for the benefit of my co-workers, without asking a majority of them to affiliate with me (in fact many kept deserting to save skins). In any case, reaching out to them and their silent acknowledgments were my greatest rewards. One or two wins, victories here and there, and smiles back on the faces of my colleagues were the clinchers.

All these 10 years, I also strived to make my office a better place to work at. I knew it was difficult to bring about the changes from outside. Yet I succeeded to some extent, only if the talents had stayed back to translate our common vision into a reality. Several of them had resigned out of disgust, disappointment, frustrations and work atmosphere that did not encourage professionalism.

As a result, there were about 100 false police complaints that I had to face along with half-a-dozen criminal cases and civil suits, and even contempt petitions in High Court. It was not sheer coincidence that I came clean in all. All these 10 years, I thus kept convincing my Board of Directors that their man at helms in my company Press Trust of India was not a visionary and hence the Directors being the custodians needed to intervene. But to no avail. Many a times, though, it appeared that a change was imminent.

It was such an unequal fight all these 10 years, with my management-sponsored people also making something around 25 million rupees, trading in union, extorting from corporates and threatening employees. Even contractual workers were made to pay to these goons to avoid embarrassment. Fighting such a system was so difficult but not impossible. I, but, faced the challenges head-on, exposing the black sheeps.

All these 10 years, my boss and his those two-three persons kept hobnobbing with who’s who of India – from President, Vice President, Prime Minister, Council of Ministers, Governors, Chief Ministers, industry honchos for personal gains that included Padma awards to cuts in deals, Rajya Sabha seats to flats in housing societies. Such high connections, such huge in-roads, so gigantic calculations, such great misuse of PTI name and fame!

Undeterred, all these 10 years, I represented journalist and non-journalist colleagues in different fora from roads to courts to parliament, at times arguing for six hours a day for many days in continuation, without any monetary consideration (in fact, the management would see to it that our resources dwindle). Last week was even more difficult as I argued my own case in Delhi High Court as the argument continued for a long time during which frequently there was loss of saliva. But I did not run short of words to defend the causes I espouse, thankfully.

While arguing my case, I had in my mind my people, my union members, my journalist colleagues, my non-journalist fraternity, my ex-PTI employees, and at the top of it my organisation PTI – the Press Trust of India Limited. How the employees were treated all these years with innumerable chargesheets and show cause notices, without any reason and just for not following the diktats!!! I and the people who are associated with me know that discipline does not mean cowardice and we aren’t cowards, we will never be.

Today i.e. 10 years later on an another May 7, the Delhi High Court passed its order in my case. As I await the copy of the order, I am given to understand that the court has dismissed seven out of eight charges against me, and has upheld only one charge i.e. refusal to work, amounting to misconduct. I, as all of us hold our courts in high esteem, feel grateful to the court to have given me an opportunity to argue my case. It was interesting to face the battery of lawyers on the other side, and during this period they changed advocates after advocates, And since now the judgment* has come, justice too will be delivered, I believe.

For the time being, a thought to myself – Can it rain forever!

* I will write about the judgment, as soon as it is possible after obtaining its copy.