Sleeps in freezing temperatures to experience being homeless

In India, while Congress’ pink-lipped Rahul Gandhi is visiting poor people’s homes, future King William is sleeping on the streets to intensely sense the problems of the homeless.

Yes, making a bed from ragged cardboard boxes in a quiet lane near the River Thames, Prince William has just slept rough on London’s streets on an extremely cold night, with temperatures down to minus four.

From about midnight last Wednesday, the prince slept out in the open until 6 a.m.

He then also cooked breakfast for a group of homeless people. 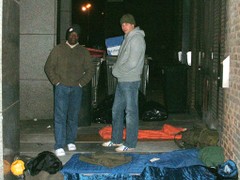 In doing so, William, 27, appeared any of the thousands of homeless shivering on London’s streets on a bitterly cold night.

The gesture was part of his support for a UK homeless charity Centrepoint and to raise awareness about those sleeping rough.

He was joined by Centrepoint’s chief executive Seyi Obakin, who told GREATER VOICE that William’s mother, Princess Diana, had earlier taken him on a secret visit to a Centrepoint shelter as a child. This had left a lasting impression that led him to become the organization’s patron.

“At a dinner some time back, I invited him to share, for one night, the experience a young person sleeping rough on the streets of London might have. It did not occur to me that he would pick up that gauntlet. But he did!” Obakin said.

“He was determined, as he’s always been, to understand deeply the full range of problems a homeless young person might face. And so it’s that on the eve of our 40th anniversary (on the night of 15th), I found myself accompanying Prince William, as we bedded down for the night around Blackfriars bridge, London.”

“For me, it was a scary experience out of my comfortable bed. And it was the same for Prince William. But he was determined to do it to raise awareness of the problem and to be able to understand a little better what rough sleepers go through night after night.”

Obakin said one of their hairiest moments on the night occurred when they were almost run over by a road sweeper which simply didn’t see their small group huddled together, which just goes to show how vulnerable rough sleepers are.

At dawn, Prince William walked through some of the streets of the West End so he could see with his own eyes many of the invisible men and women who are rough sleepers in the buzzing centre of London.

Prince William must have understood that what he experienced would just be a fraction of what it means to be truly homeless and afflicted.