Sherawat is her mother’s last name and ‘mallika’ means the empress so she changed her name to Mallika Sherawat while stepping out of a small Indian town. Since then… she hasn’t looked back. Yes, she may not be a beauty and might also be missing the best of figures… yet her tight dresses make her stand out.

World famous composer Yanni has already dedicated his song “Changes” to this sexy diva. Jackie Chan has also escorted her to Cannes. And now, she has just rocked the world as her latest movie “Politics of Love” is making news. Isn’t Mallika making a new landmark for Indians in Hollywood?

In a latest, her pictures with US President Barack Obama was splashed across the media as the two met over tea in Los Angeles. KEWL!!! “Politics of Love” tells of love stories that blossomed during Obama’s election campaign and it has been reported that Obama even requested a ticket to the premiere! 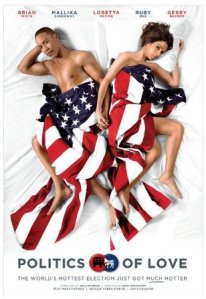 Today, Hollywood is talking about Bollywood. Isn’t that great? Obama’s love for the big-big Indian movie industry is also clearly seen from their beaming smiles. Moreover, the timing of his meeting with the lucky girl past week also seems good, as Obama makes his second presidential bid. Is he eyeing Indian Americans!!!

Plot Outline: The world’s hottest election just got much hotter… Politics has never been this sexy… She was swift-boated by sex-tape! – Politics makes strange bedfellows, but never stranger than when, a month before the 2008 U.S. Presidential election, Kyle Franklin, a sexy, savvy, African American conservative falls for his Democrat counterpart, Aretha Gupta, a beautiful, idealistic local Obama volunteer coordinator. Sparks fly, tempers flares, heads turn, and romance blossoms for this mismatched pair of campaigners in the frantic and intoxicating days leading up to Election Day. Can the politics of love conquer all?

Well, I’ve seen some of the clips from “Politics of Love” as also many of her movies including “Murder” and can recommend watching the video from the one opposite Jackie Chan — ‘The Myth’.

In the video, her blouse falls off and she goes topless. The picturisation of the scene is outstanding as the camera shows her back only. Interestingly, this scene was finalized after several re-takes.

Her floor length gown had a lace top with a plunging neckline that reached down to her waist.

But … quite visibly, her tummy is seriously becoming flat… very flat. Hope she doesn’t just lick her lipstick when hungry. And hey, don’t get menacingly close to her. She can even thrash you down. Don’t believe this? Watch it here.