World Cup winning captain Mahendra Singh Dhoni figures in the TIME magazine’s list of 100 most influential people in the world.

The cricketer shares this distinction for the year 2011 along with fellow Indians Mukesh Ambani, Azim Premzi and Aruna Roy. Indian American V.S. Ramachandran also figures in the list. 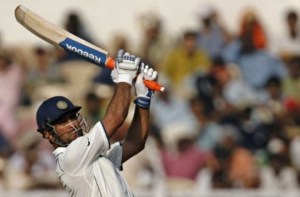 In April, when India won its first Cricket World Cup in 28 years, it felt as if the entire population of 1.21 billion had spilled out into the streets to party. Mahendra Singh Dhoni, 29, the Indian captain, finished the final game by flamboyantly hitting the ball into the stands, cementing his country’s dominance of the world’s second most popular sport. Dhoni is now universally acknowledged as India’s best captain ever. He’s also its most likable, exuding both cool confidence and down-to-earth humility.

As astonishing as Dhoni’s talent is his background. Indian success stories are usually associated with pedigree, connections and power. Dhoni, from a small-town family of modest means, had none of these, but he’s shown India that you can make it with only one thing: excellence. Dhoni doesn’t just lead a cricket team; he’s also India’s captain of hope. And he didn’t just win India the World Cup; he also taught India how to win.

On Mukesh Ambani, the magazine carried a piece by Suketu Mehta, author of Maximum City: Bombay Lost and Found:

Mukesh Ambani’s story is straight out of the Bollywood movies of his hometown. He started out in life crammed with six people into a two-bedroom tenement in the most congested part of central Mumbai. When he grew up, he constructed a billion-dollar, 27-story castle towering over Mumbai’s established elites. Therein, his family of five has 400,000 sq. ft. (37,000 sq m) to stretch out, including a room where, as they gaze out over the slums below and the Arabian Sea in the distance, snow can be commanded to fall from the ceiling. And oh, along the way, Ambani, 54, also took the firm his father founded — Reliance Industries — and turned it into India’s largest private-sector company, a $45 billion petrochemicals giant. It’s a new kind of Indian company, built through adroit manipulation of governments and the stock market but also enriching millions of shareholders. “We have taken money from ordinary Indians, and we are their trustees,” he says. As long as the money keeps coming, they may forgive his excesses.

Azim Premzi’s description was given by none other than Microsoft chairman Bill Gates:

If anyone personifies India’s economic transformation, it is Azim Premji, chairman of the information-technology powerhouse Wipro Ltd.

A pioneer of India’s IT-outsourcing industry, Premji helped unleash a generation of skilled technical professionals who make up India’s growing middle class. Inspired by his belief that a strong educational system is essential to sustaining the economic growth needed to pull millions of Indian citizens out of poverty, Premji, 65, is deeply involved in efforts to provide universal primary education in India. The Azim Premji Foundation supports programmes that reach more than 2.5 million children.

But it may be his pioneering leadership in India’s nascent field of philanthropy that will be Premji’s lasting legacy. His recent $2 billion donation to his foundation was the largest charitable contribution in the history of modern India. Ultimately, how he approaches philanthropy could prove to be just as important as how much he gives. His philanthropic work has been characterized by collaboration and transparency. He is setting a remarkable example for those who have benefited so enormously from India’s economic expansion and are looking for ways to give back.

Starting from a tiny village in the deserts of Rajasthan in the 1980s, Aruna Roy began a long campaign to bring transparency to India’s notoriously corrupt bureaucracy. Its signal achievement is the 2005 Right to Information (RTI) Act, a law that has given the nation’s poor a powerful tool to fight for their rights and has influenced similar measures in other countries. It has also inspired thousands of RTI activists, who have exposed everything from land scams to bank embezzlement to the misuse of public funds meant for the poor. Since then, Roy, 64, has helped shape an ambitious new rural jobs programme and a food-security bill that will come before Parliament this year. Many social activists clamour for India to do more for the dispossessed. A former civil servant, Roy doesn’t just condemn a broken system; she changes it.

On V.S. Ramachandran, the magazine said:

Once described as the Marco Polo of neuroscience, V.S. Ramachandran has mapped some of the most mysterious regions of the mind. He has studied visual perception and a range of conditions, from synesthesia (in which viewing black-and-white figures evokes the perception of colour) to autism. But Ramachandran, 59, is best known for developing a therapy for phantom-limb pain in which a mirror is used to reflect the intact limb, creating the illusion that the missing one is still there. That persuades the brain that all is well, and the pain subsides. With his simple, creative and innovative ideas, V.S. Ramachandran is changing how our brains think about our minds.

From TIME managing editor Rick Stengel, read an explanation of this year’s list of the 100 most influential people in the world to learn how they picked this year’s group.

“It’s already become a ­cliché to say that change is the only constant, but more than ever, we are living in an age of constant, transformative change. The Arab Spring represents a world historical cascade of events that is changing the Middle East. The earthquake and tsunami in Japan could change the history of Asia. And this season of revolutionary change has been deepened, widened and accelerated by the power of social media. It’s never been easier to influence or to be influenced.

This year’s Time 100 list reflects those stories, whether from the Middle East or Asia or the world of social media. You can sometimes impute influence by reverse ­engineering events: Who was responsible for triggering these extra­ordinary movements? Wael Ghonim’s plaintive posts on Facebook helped spark the Egyptian revolution. Fathi Terbil’s detention helped ignite the revolt in Libya. Katsunobu Sakurai denounced the lethargy of Japanese authorities in helping earthquake victims. The artist Ai Weiwei became the conscience of China.

Influence is impossible to measure. It’s a little like what social scientists call the butterfly effect: the idea that a tiny change in one part of a system can yield gargantuan changes later on. But often this is a romantic illusion; large-scale changes occur only when great numbers of people become restive over time, just as people in the Middle East have been moved to shake off decades of ­authoritarian rule.

What social media have done is to make us all more aware of what’s going on—and offer a new avenue to organize opposition. We like to think revolutions rise from below, but through most of human history, it’s the elites who have caused and led revolutions. Now, because of social media, anyone can communicate with everyone. We’re seeing that in the Middle East, Africa and China. The democratization of information may actually lead to real democracy.