Why did Reliance kill CDMA!

There is general understanding in India that one of the fattest business families i.e. the Ambanis are cheats. There shouldn’t be such biased opinions against them for they are into business for so many years. Further, they deal with virtually anything and everything, today.

Had they been cheats, all in the family should have been behind bars and their companies closed down. To the contrary, at least one from the family is visible on television and newspapers on a daily basis.

We live in houses, the Ambanis live in spaceship

The Ambanis are omnipresent even on the sports grounds by virtue of being team owners and by the way, do you know the family also has a stake in Hollywood? They are part of DreamWorks, originally founded by the legendry Steven Spielberg.

Every now and then you get to hear gossips and stories about they being the richest in India, their house being the costliest in the world, one of their heirs reducing tens of kilos in few months.

It all started with their family head Dhirubhai Ambani emerging as a successful textile merchant some decades ago. To highlight the family and their business style, even a Bollywood film was made in 2007, named ‘Guru’, based loosely on Dhirubhai Ambani.

By that time, the family had already started its telecom business under the banner of Reliance Communications (RCom). Then, many bought the company’s CDMA phones, which are now being phased out, suddenly. 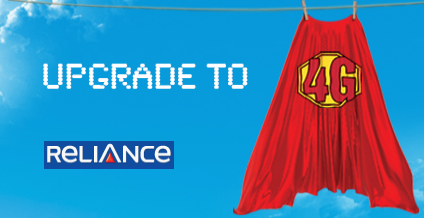 Reliance CDMA customers are being forced to upgrade to faster 4G services, thereby also meaning that they have to dump their CDMA handsets which indeed proved to be reliable over the years. And there are roughly five million CDMA customers…!

Such rolling out is so hasty that Reliance customers are shocked to receive short notices by way of SMS on their phones that they need to migrate to 4G, at once. Should we call this mere upgrading CDMA customers to 4G services or is it by way of forcing them to dump their handsets which still hold value!

Shutting down of CDMA services will prevent customers from using their phones which do not support GSM services and as such subscribers would have no access to Reliance CDMA network.

Also, there does not seem any justification in the company texting its subscribers to switch to new phones and new services abruptly, without proper and timely notice. What will happen to the CDMA phones? Will they become plastic wastes?

In the States where CDMA service is still available by telecom company like MTS, the shutdown of Reliance CDMA service will let the subscribers switch over to the other operator as an alternative option, provided porting out is smooth, hassle free and in time.

Those really desirous of migrating from CDMA to 4G can click here to go directly to their migration process webpage.

Ratings company like Moody’s should take note of this CDMA scam even if the government’s Department of Telecommunication fails to question the Ambanis for this dubious upgrading of network from CDMA to better technology.

And what if the such moving of subscribers from CDMA to 4G leaves them vulnerable to poaching from telecom rivals? Who cares! May be, someone truly said it, sometime ago – Some people are rich. Others are affluent. Then there is the Ambani family.

To quote actor Gul Panag, her Mr. is disappointed over the CDMA-GSM switch over, as she says, “HIS faithful #cdma phone. HE’s very upset about its impending death…” God, we live in houses, the Ambanis live in spaceship. That is why we’re discussing CDMA here while they are creating their own weather, there… there… up in the sky.